“5 Live is getting straight to the heart of things.” These were the words of Adrian Van Klaveren controller of BBC Radio 5 Live and 5 Live Sports Extra. Adrain was the speaker for last Thursday’s Coventry conversation.

He began his presentation referring to the world of radio as an old medium that has survived the years and still has a resonance with modern life. Radio he said has been under all sorts of threats; threats from television and threat from the age of the internet.

Talking about radio having a place in people’s hearts in Britain, he said: “Radio has a special place in the UK with forty-eight million listeners a week.” Unlike television and reading which require a vast amount of concentration, radio he added can be used effectively as a secondary activity.

Radio depicts the power of speech. It has a sense of drama, immediacy and involvement. He expressed that radio sport commentary is central to what 5 Live is does. Speech radio is in a strong position in the UK and more people are seeing what live radio had got to offer. Radio stations he cited in the category of speech radio included 5 Live, Talk Spots and BBC Radio 4.

Adrian highlighted the changes in the past three to four years because of the improvement on advance technology.

“We always acknowledge the fact that somebody out there might know more than we do. They may have experienced what we talk about emotionally or have a connection to it in another way.”

In highlighting the changes in the world of radio he also stated: “The world of radio is changing very fast. The radio is no longer the box that sits in the corner of the room. People tune in on their phone; and follow either on facebook or twitter.”

His passion for 5 Live was evident when he stated 5 Live is about breaking news, live sports and original Journalism. Further adding to this affirmation he said 5 live studios it is one of the few places people come together and talk about the same thing.”

A successful radio station is a station that is clear about what they do. 5 Live does news and sport and there is an audience that likes both. Radio becomes part of people’s daily life and it’s habitual.

Talking about presenter on radio he said: “you want presenters with character. Ones that can connect with the audience and stand out. We want people who will go to the edge and not over it.”As a radio station, involvement in big event and multi-platform makes you stand out.

The future for us is a digital one he reiterated. With digital becoming the key to success he stated: “Digital means more choice and better quality.”

Summing up his presentation, Adrian Van Klaveren said successful radio is one that has things that are relevant. With that he said: “Things that I want to know and care about.” It has to be information and adds to the listener’s knowledge. Stressing on the entrainment audience like to get from listening to radio he said: “If they don’t like it, they will turn it off.”

He concluded saying: “If you do these three very well then you are guaranteed to be successful.”

I couldn’t resist than to buy the primrose that caught my attention as I walked past the flower shop this afternoon.

The walk home got me thinking about primroses and flowers in general. I decided to do a research and these were my findings;

Primrose flowers bloom in spring. There are around four hundred species with some found on every continent. The come in white, cream pink, orange, purple or striped and given proper growing conditions, they multiply each year.

Primrose thrives well in damp and woodland like conditions. Slugs and snails are the common attackers of primroses.

The different types of Primrose are:

Candelabra primrose: Blooms in late spring and flower stalk can grow to about thirty-six inch tall. It blossoms in white, red, purple or pink.

Common primrose: This is a native to Britain, Ireland and Europe. It blooms late winter to early spring.

Cowslip: Blooms in mid to late spring and can grow to about eight to ten inches tall.

German primrose: Blooms late spring to early summer in shades of pink, red or lavender. The stem can grow to about twelve inches tall.

More so, they are hybrid primroses but those don’t tend to thrive well.

Do you have a favourite flower?

The celebrations were not just about the Dragon dance as that was central to the New Year but also about the different activities that took place.

Others just changed the meaning of all they read without even realising. Chinese as you might know is the tonal language and therefore the sound of the word determines the meaning.

Business Admin students, Aijia and Jingya Liu telling the audience about their experiences in Coventry.

Carrying a ping pong ball from one end of the room to the other with a chop stick. 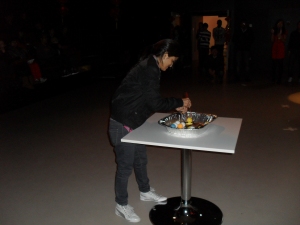 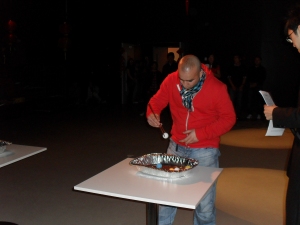 All you can eat gala 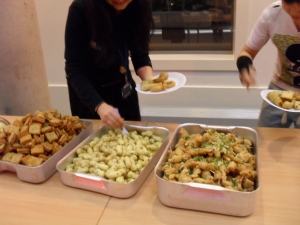 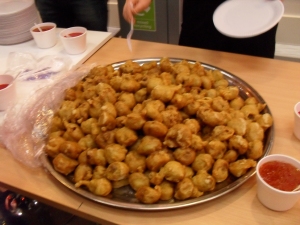 2012 is the year of the Dragon. In the Chinese lunar calendar this will be the 4709th year. Food is an intergral part of the 15days long celebration. Friends and family gather on this very important occasion to enjoy many dishes that are known to represent good luck and abundance. This association with food is found in either their name or their shape.

Foods that are symbolic of good luck and often eaten during Chinese New Year include:

Dumplings a.ka. Jiao zi: Chinese dumpling or Jiao zi is the staple course on the Eve of the Chinese spring festival and it is considered superior amongst the foods eaten. They are considered lucky to eat during the holidays because the first banknote of China is called Jiao zi

In the north where wheat is the main crop grown, Jiao zi is made from wheat and in the southern regions where rice is the staple food house wives make recipes of sticky rice flour balls. There is no set recipe for Jiao zi filling. The filling can be anything from vegetable, meat, egg to seafood. 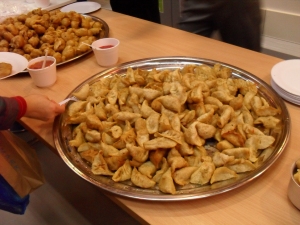 Noodles: Noodles represents longevity therefore it is not broken into chucks before cooking. An old superstition also says that it is bad luck to cut them. This is a holiday where you have an excuse to slurp and make a mess on those long noodles. The noodles are prepared with soup or stir fried.

Spring rolls: Spring rolls have a shape similar to gold bars and it is eaten during the spring festival to symbolise wealth and good fortune.

Fish: The Chinese word for fish is “Yu”. This is a homophone for ‘wish’ and ‘abundance’. The steamed fish is served whole, with the head and tail together symbolising a good beginning and ending of the coming year.

The Chinese new year is a chance to leave the disputes and bad situation of the previous year behind and start the new year afresh, hence the cleaning up of the their houses and buying of new clothes.

From the association the Chinese makes with food and the various things around them, it is clear that Wealth and abundance is an extensive part of their culture. The red envelopes (Hong bao) give to children and unmarried adults also contains money

Xin nian kuai le is to say Happy New year in Chinese Mandarin but also a very popular and definite wish around the spring festival is Gong Xi Fa Cai. This is a congratutions and prosperity wish but literally means ‘make a lot of money’.

To all my readers, Xin Nian Kuai Le and Gong Xi fa Cai! The year of the Dragon starts today as Chinese all over the world celebrates New Year 2012.

As part of one world week, Coventry University Culturae Mundi celebrates Chinese New Year, the year of the Dragon.

The programme took place at the Hub from 3pm till 8pm this evening.

The sweet sound of the orient, the pounding of the Chinese traditional drums and the dance of the Dragon was a spectacular sight to behold. This Dragon dance was immediately followed by TaiChi, a dance that is very prominent in China because of its health benefits.

The Chinese New Year is the most important day for the Chinese and in China; it is a celebration that lasts for 15 days.

In Chinese mythology, the dragon is very special and revered. Unlike in the western world where the dragon represents fierce creatures that are slain by knights, for the Chinese the dragon is a symbol of power, superiority, strength, and good luck. It is also believed that those born on this year are powerful and ambitious.

These were what some student had to say when ask what the celebration means to them.

Aijia a second year business administration student say: “The celebration has given me the chance to know more people and also to see how the world outside China celebrates our New Year”.

Jingya Liu also known as Grace says: “This occasion is special for me as I never imagined the university will hold such a gala for the Chinese students.”

Sunny a third year Journalism and Media student say: “I feel a sense of warmth. Even though, I am a foreigner, Coventry University recognises what this celebration means to us. I really miss my parents”.

The celebration carries on from 9pm tomorrow up until the wee hours of 2am.

It’s the first day of the year and most people like to pay attention to what they hear. An encouraging and uplifting start is what most people yearn for. The year may have uncertainties but you would rather be for the positive news.

With Pastor Kingsley Appiagyei sharing insights and a prayer into the months ahead, what more could we ask for?

The topic for today was centred on Uncommon Ideas.

Everyone usually has an idea on how they want things to be done or an idea about a situation. It might not be in-depth but they still have a plan of some sort.

Talking about Uncommon Ideas is not only about a plan of some sort people usually have in mind, but rather a thought or impression that sets one apart from the crowd.

He looked at what he meant by an idea.

Elaborating on Ideas, he cited

Great Ideas that have changed the world

How do we get ideas?

What are the ideas that work?

He also shared that God doesn’t put money into our pocket but rather He blesses us then gives us an idea.

When God decides to bless you

So why don’t you develop on that brilliant idea that has been on your mind all this while.

Thanks for dropping by.

I’m hoping you had an awesome new year’s eve and where ever you may be you’re still having fun.

I was privilege to attend a vigil service. I would choose that and time spent with family over a crowded city with drunken young and old people.

The 3 profound blessings he were

As believer, he reiterated that the essence of our calling is to preserve.

Perseverance he said is a military state as it needs a lot of effort. He also shared the principles of perseverance.

In this New Year, he urged us to travel light in the sense that we should throw down all those emotion that beset us. Throw off bitterness. Also he urged that we avoid litigation. Avoid fornication and adultery.

In 2012 learn to fight your battles on your knees.

Citing the statement of ‘Winston Churchill’ – ‘never give up’

He reminded us of Joseph who maintained faith in a hostile environment.

To persevere; we need to pass the strength test.

The woman of Nain

Finally Pastor Kingsley summed up by saying the perseverance of John Akhwari at the 1968 summer Olympics in Mexico should be our yard stick.

If you are reading this post, good to see you in 2012. Thanks for dropping by remain blessed. Have fun! 🙂